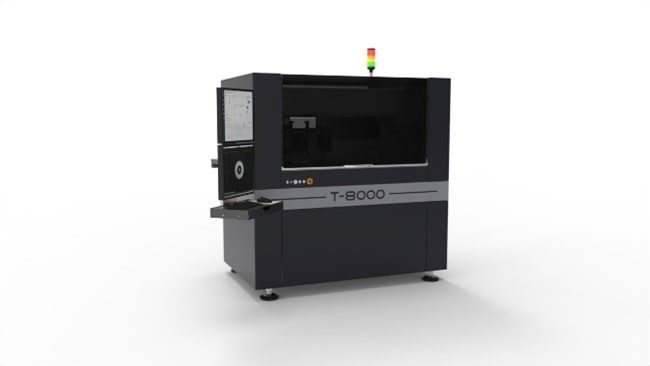 Tresky GmbH will showcase three new options for its die bonders during SMTconnect in Nuremberg, Germany, May 10-12, 2022, in Hall 4A, Booth 234: a new precision placement head, a vibrating feeder and a new wafer handler.

With the air-bearing bond head developed by Tresky GmbH, highly sensitive components can be placed powerfully. Finally, newly developed semiconductor chips are becoming smaller and thinner due to the continuous miniaturisation in the electronics industry. In addition, new materials are being used to manufacture chips. In the past, for example, silicon (Si) or germanium (Ge) were mostly used to manufacture semiconductors. Particularly driven by the development of new generations of laser, LED, diode or transistor semiconductors, materials such as gallium arsenide (GaAs), gallium nitride (GaN) or, for example, silicon carbide (SiC) are now also being used. Some of these compound semiconductors, such as gallium arsenide (GaAs), have the disadvantage, in addition to their positive electrical properties, of not being very stable mechanically and breaking quickly. This leads to enormous challenges in packaging technology during chip bonding.

In order to minimize the contact forces during bonding, the engineers at Tresky GmbH have developed a bonding head with air bearings. This enables a backlash- and friction-free vertical movement when placing the chip. The air bearing is kept in a floating state by vacuum or compressed air and is controlled by a proportional valve that can operate from vacuum to atmospheric pressure. The bond head recognizes changing weights and can thus maintain the floating state at all times. This results in a weight compensation of the component. By changing the proportional valve from vacuum to pressure, a defined weight force can now be applied in a vertical direction to the semiconductor component to be placed or picked up with an exact force.

Furthermore, Tresky presents a new vibrating feeder. By means of vibration technology, this universal feeding system feeds components delivered as bulk material to the processing stage. The design of the feeder makes it possible to position components in a vibrating, small open container in such a way that the head camera recognizes the individual components clearly and precisely. At the same time, the vibrations position the components so that the top of the component faces upwards. In addition, 99% of all component geometries are compatible with this vibrating feeder. Depending on the quantity of components, different hopper sizes are available. From there, the components are transferred to the vibratory container. The feeder can be easily integrated into all existing die bonding systems from Tresky without any major changeover time.