IPC recently released a full November economic outlook report based on the effects of Covid-19 in 2020.
Source: IPC 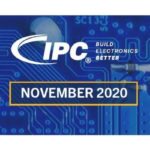 Although there has been some improvements, Covid-19 remains a risk in the U.S and Europe, like much of the world.
Source: IPC 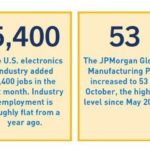 Across both the United States and Europe, Covid-19 cases have accelerated sharply. The IPC’s November economic outlook report depicts details on the effects the virus has had on industrial production, capacity utilization, PCB production data and more. It also illustrates the U.S. and European data on economic growth, employment, Manufacturer’s Sentiment (PMI) and end markets for electronics.

The increase in cases has renewed stay-at-home orders and other restrictions across a number of states in the U.S. and throughout a number of countries in Europe. While these measures are not as severe as they were early in the year, they will still curtail economic activity in the coming months. The degree to which these measures slow economic activity will reverberate into 2021. Some of the fallout is already materializing. For example, European economic growth is expected to decline in the fourth quarter, the proverbial double-dip recession, and modest rise in the first quarter of 2021. While a double-dip recession is not the base-case scenario in the United States, the risk of a double-dip recession has increased to 25 percent or so and could go higher if current conditions turn materially worse.

But the last month hasn’t been all bad news. There has been positive news regarding early vaccine trials from Pfizer and Moderna. Early tests show efficacy rates higher than 90 percent and the likelihood that vaccines will begin to be distributed in the early months of 2021. This news was very welcome for many sectors of the economy.

In the U.S., economic activity continued over the last month, but as noted in the past, growth is moderating. Jobs increased, and the unemployment rate fell, but the rate of growth is slowing. There are still 3.2 million workers who report they are on temporary layoff. Some, and perhaps many, of these jobs, won’t be coming back soon. The manufacturing sector added back another 38,000 jobs in October, after adding back a high of 333,000 jobs in June 2020. The manufacturing sector has now returned roughly 54 percent of jobs lost in the early months of the pandemic, but at this rate, it will take another 16 months to return to the pre-pandemic level.

One concern is the rising risk of structural dislocations in the labor market. Roughly a third of those unemployed have been so for longer than 27 weeks. As workers stay unemployed for longer, skills are lost, and the ability to find new work diminishes. Europe is experiencing similar decelerations in growth. As already noted, after a strong bounce back in the third quarter, growth will turn negative in the final quarter of the year. In the U.S. and Europe, like much of the world, Covid-19 remains a major risk and the major driver.

China continues to lead the world economy in recovery. China was hit early by Covid-19, but strong lockdown procedures and significant testing mitigated the spread of the virus there. China also implemented aggressive monetary and fiscal stimulus in the aftermath of the outbreak. China’s fiscal stimulus response is equal to roughly 4.5 percent of GDP. Containment of the virus has enabled China to largely reopen their economy. The Chinese economy grew 4.9 percent (year-over-year in the third quarter), stronger than the 3.2 percent year-over-year growth recorded in the second quarter, but a bit below expectations. China is on track to expand about 2.5 percent in 2020, the only major economy to record positive growth in 2020.

OE-A survey shows decline in sales due to Corona pandemic

When the pandemic hit, consumers and businesses cut back on consumption. Stimulus measures helped lift consumer spending, positively impacting goods while spending on services remained depressed. This drove demand for manufacturing output, but future growth for manufactured products will be more difficult as stimulus wanes. The initial shock and the immediate aftermath of the pandemic is starting to move towards a traditional recession.

Euro area GDP increased 12.7 percent in the third quarter (12.1 percent in the EU), the strongest quarterly growth since records began in 1995. GDP is still down 4.3 percent from the prior year (3.9 percent in the EU). In comparison, the U.S. is roughly 3.5 percent below last year’s levels. France saw the strongest jump in the third quarter, rising 18.2 percent. Spain (16.7 percent increase) and Italy (16.1 percent increase) also experienced solid growth. Germany was up 8.2 percent during the quarter and is down 4.2 percent from the prior year. On a year-over-year basis, Spain continues to suffer the worst, down 8.7 percent, highlighting the importance of international tourism to that market. Despite a strong recovery in the third quarter, economic growth in Europe is likely to decline in the fourth quarter.

France, Germany, and others have imposed severe lockdown measures as a result of accelerating Covid-19 cases across the continent. For example, French statistical office (INSEE), estimates that France’s economic activity fell by almost 10 percent in November compared to the prior month. Growth for the eurozone in the fourth quarter is expected to decline roughly 2.5 percent before rising just under one percent in the first quarter of 2021.

Manufacturing output in the European Union was flat in September, moving from 100.1 to 100.2. This is down 5.9 percent compared to last year, which is slightly better than August, down 6.3 percent from the year prior.

The full report goes into further detail about the American economy, as well as the changes in the unemployment rate since the pandemic began. 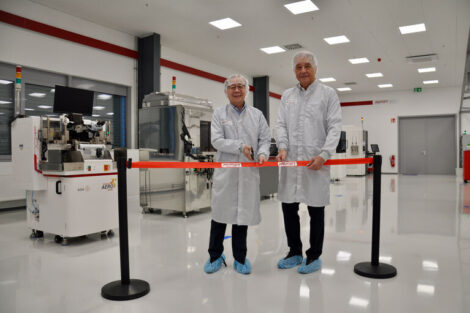